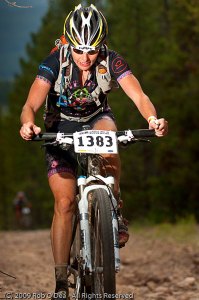 Wendy Lyall Faces Felony for "1383" on Bike in Leadville 100 (Photo Courtesy Rob O'Dea, who holds and reserves all copyrights)

in the 2009 Leadville  Mountain Trail 100 .   This meant that Lyall  finished second in the women’s age 40-49 class, despite being 36.  As the Denver Post explains, spaces are highly coveted for the grueling race, and there are more masochists than slots for the competition, which elevated in prestige last year as Lance Armstrong entered and won the event.

The soaring popularity has converted the race’s entry lottery into a gone-in-minutes clamor for bib numbers. Entries are not refundable or transferable, which is reiterated at every pre-race briefing, [race organizer] Chlouber said.

Just before last August’s race, Chlouber said he received a call from a local bike-shop owner pleading for an entry number for Brazelton, who did not win a slot in the lottery. Chlouber granted the request.

“This truly is really sad for us,” he said. “We try to do the right thing, and then people cheat.”

Certainly some athletes cheat, but I naïvely thought that these sports rules violations were usually handled within the sport rather than being prosecuted as felonies by local DAs.  But then again, Hurlbert himself spends lots of time on the men’s 40-49 cross-country skiing circuit , so this “crime”  probably hit him close to home.  I wouldn’t want to be some 36-year old guy caught skating past him across the finish line in the Frisco Gold Rush nordic race, that’s for sure.

But it looked like the event organizers did take care of the problem from within:

When contacted by Chlouber and, later, by Lake County Sheriff Ed Holte, the women confessed to the deception. They returned the coveted belt buckle, pendant and necklace that came with second place and sent Chlouber a letter admitting their wrongdoing and offering “to do anything to rectify the situation.”

“But the situation cannot be rectified,” Chlouber said. “You can’t go back in time and give those ladies who should have podiumed their time in the sun. That’s gone.”

Well, not exactly.   The women who should have been on the podium, will be there this year in a special ceremony at the August event.  And, both Lyall and Brazelton are banned for life from the competition and may receive other intra-sport sanctions.   If organizers want more action taken, that’s what private civil lawsuits are for.  [Update 5-10: Sheriff Ed Holte told me he did not contact either of the women or take a confession from them and had no contact with them whatsoever.  He simply took Chlouber’s complaint and passed it along to the DA.   It seems clear, then, that this was primarily a Hurlbert transaction].

Hurlbert says, “after talking with people in the race, this is something very serious.”  Very serious to whom?  The plaintiff in the case,  The People of the State of Colorado?  Do we the people really need to have our  money spent in a recession to protect us from the growing scourge of entry swapping at endurance sports events?   Real criminal filings are down, Hurlbert’s budgets and salary are up, and I guess this is what happens when government has too much of our money to play with.  Good thing he’s not the Denver DA or we might see “illegal receiver” at a Bronco’s game take on a whole new meaning.

[Updated 5-10: More details about how this race is run and what may really have happened with the registrations of the racers, are commented on  by some Eagle County mountain biking bloggers, who point to a $265.00 non-refundable and non-transferable fee, which Chlouber allegedly resells to other racers.   The latest is from Eric Rubottom.  The comments section to this post contain more inside-mountain bike racing insight.

Race Director  Ken Chlouber is  a former House District 56 Rep.,  a  Republican who often went against the Republican party on issues he disagreed with.  He served from 1986-1996, and was a state Senator before that.  Chlouber failed in another  run for HD 56  in 2006].

I’ve  written elsewhere that Hurlbert “picks the wrong battles to fight, and the wrong ones to quit.”  Just like the infamous snowball throwing case at Copper that gained international notoriety, and left Hurlbert whining defensively after his lengthy and expensive pursuit ended in failure.  This laughingstock  is mocked in this Hitler parody video of Hurlbert.  (Like other Hitler parody producers, we are involved with a “fair use” copyright appeal,  so just click on the link on the screen after hitting play, and the video will play in its own window).

Wendy and Katie (aka Vail’s Thelma and Louise) would have been much better off  if instead of committing a serious felony like cheating at mountain biking, they snowboarded drunk down the slopes of Vail and ran over an eight-year old girl in a hit and run.  That man got a few hours of community service in Hurlbert’s plea deal.  Or they could have been charged with attempted murder, and got that plead down to a misdemeanor with no jail.  Another option would be to pull a black woman by her hair across a bar room floor, tearing half of it out while screaming the c-word and the n-word at her.  They could have gotten that felony assault reduced to a misdemeanor with 60 days of work release.

I haven’t seen this criminal-impersonation law used much, but Hurlbert’s expansive application of the statute opens up some interesting possibilities.  Given Hurlbert’s lackluster campaign for state Senate District 16 and his dismal fundraising,  perhaps a  special prosecutor should be appointed to investigate whether to charge Hurlbert with felony criminal-impersonation of a Republican  Senate candidate.