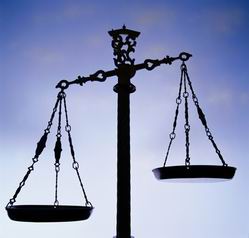 The scales of justice are out of balance, just as this photo taken unaltered from the Colorado Supreme Court website demonstrates in a welcome display of government transparency (intentional or not).  Ex-Pat Ex-Lawyer believes government is supposed to work for “We the People” and not the other way around.

We focus on legal and political issues from a conservative/libertarian point of view, strongly supporting all civil liberties, including property rights, freedom of speech, Second Amendment, and criminal justice issues.   Our Colorado politics coverage centers on the need for unyielding fiscal conservatism, transparency, education reform, and the economic killer-plague of public employee unions.

We started this blog because the mainstream media, both in the metro areas and the small towns, fail in general to cover local politicians in a critical manner, and instead often turn their “articles” into nothing other than press releases for the politicians they depend upon for their stories.

Ex Pat Ex-Lawyer welcomes suggestions from any readers about what might need covering that’s not being covered adequately, and we appreciate all comments be they critical, flattering or somewhere in between.

18 responses to “About Ex-Pat Ex-Lawyer”